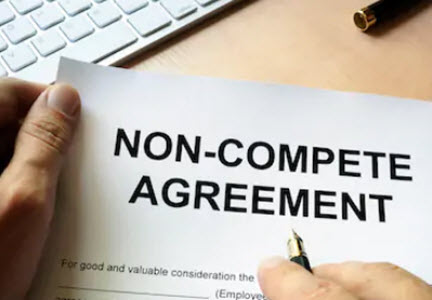 Most of the pandemic restrictions on in-person commerce and socializing have been lifted, but where is everyone?  Employers are delighted to be able to reopen for business, but life has yet to return to its pre-pandemic pace.  Even as eviction moratoriums run out, millions of people seem not to be in a hurry to return to jobs that would welcome them back.  Millions of people, excluded from in-person workplaces for a year or more, have had time to think about the things they don’t miss about their old jobs.  Of course, individual people have their own opinions about which aspects of the pre-pandemic workplace they do not want to see return, and it is too soon to know which changes will be permanent.  This month, President Joe Biden issued an executive order that aims to change one aspect of the old ways, where employers act as though employees owe them every minute of their time, even outside of work hours and even after the employment ends.  Specifically, the executive order aims to restrict non-compete clauses.  If you have questions about an existing non-compete agreement or about non-compete clauses in general, contact an Alabama business law attorney.

The Trouble With Non-Compete Clauses

The most insidious non-compete agreements go beyond just protecting trade secrets and even prevent former employees from opening their own businesses within a certain radius of their former workplace or seeking employment with an existing competitor.  The worst ones effectively force employees to move out of state or change professions.  Currently, at least 35 million Americans are subject to non-compete agreements, either because they are still working for the competition-phobic employer or because they have left the job but the non-compete clause is still in effect.

Twilight of the Non-Compete Agreements?

An executive order signed by President Biden in July 2021 aims to curb the use of non-compete agreements, especially the most restrictive “you’ll never work in this town again” ones.  It encourages federal agencies, including the Federal Trade Commission, to limit the use of non-compete agreements or ban them entirely.  It does not include specifics about how the federal agencies will achieve this, but it does not target restrictions on sharing client lists.  The best thing Alabama employers can do now is to ensure that their current non-compete agreements are enforceable under state law.  Employers should also review their training materials and other competition-sensitive information and revise it so that it can stay within the company even if a future law does not allow you to require employees to sign non-compete agreements.

A Birmingham business & corporate litigation attorney can help you protect your company’s confidential information and comply with non-compete laws, even as the laws change.  Contact Cloud Willis & Ellis for help today.