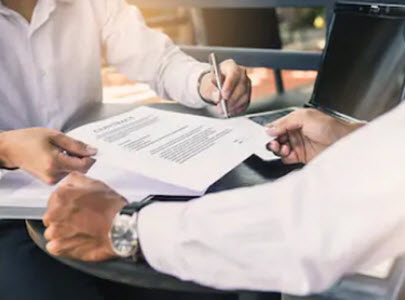 Being able to talk a good game is a useful skill for an entrepreneur, you need everything in writing.  You can probably attribute the success of your business in part to your ability to be straightforward except when there is a reason not to, to persuade others that they will benefit from following your suggestions, and to find common ground with almost everyone.  These skills might help you solve most interpersonal disputes with colleagues, business partners, suppliers, competitors, and landlords, but if your dispute becomes a formal lawsuit in court, then nothing you said in conversation, no matter how tactful or inspired, will hold any weight.  Written contracts are enforceable in a court of law, but oral contracts are not.  The more details the better.  Even if you pride yourself on being a people person who finds nothing more boring than poring over pages and pages of fine print as bookworms do, it is important to set out all the details of your business agreement in writing.  Even if you are too busy being personable to review every line of fine print in your business contract, you could be setting yourself up for costly legal disputes if you do not go over your contract with an Alabama small business lawyer.

In the early 1970s, Timothy Jackson and his wife opened Ray’s Barbeque restaurant in Gadsden; the restaurant remained in the same location until 2012, when a fire destroyed its building.  John Davis, the owner of a roadside service plaza called Supermart, offered to let Jackson operate Ray’s Barbeque in a space in the service plaza.  The terms of their oral agreement aimed to enable Ray’s Barbeque and another Supermart restaurant, named Austin’s Seafood & Steakhouse, both to thrive.  Ray’s was to operate during breakfast and lunch only, so as not to diminish Austin’s dinner crowd.  In return, Austin’s would not be open for breakfast, and it would not serve hot food at lunch.  Jackson paid Davis $2,000 for the first month’s lease, but by the second month, Davis had demanded that Ray’s vacate the premises.

In court, each party told a different side of the story about how the other had breached the agreement, but since there was no written agreement, the court could not tell who was being truthful.  Davis claimed that Ray’s had failed to open during breakfast hours, leaving Supermart without a breakfast option, and that the agreed upon monthly rent was $3,500, but Jackson had only paid $2,000.  Jackson claimed that Davis had unfairly terminated their agreement for a five-year lease, but Davis claimed that it was always meant to be month to month.  In the absence of a written agreement, it was a much bigger mess than it needed to be.

Barbecue should be messy, but business deals should not.  An Alabama business & corporate law attorney can help you formalize your commercial leases and other business agreements so that they are legally enforceable.  Contact Cloud Willis & Ellis for help today.